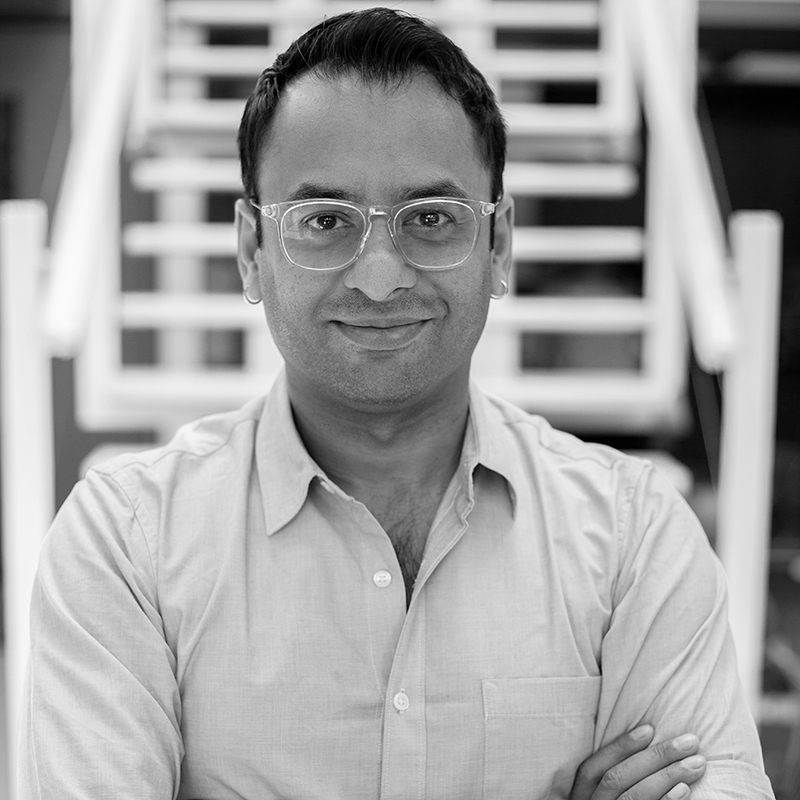 Ashu, as he is fondly referred to, is a multi-instrumentalist performer and producer. With over 15 contemporary music albums in the last two decades to his name, he is a much-in-demand composer in the advertising and film circles.

He has composed music for over 4,000 television commercials and soundtrack for over 10 feature films, including critically acclaimed films like the Mahesh Bhatt-directed Tamanna (1997), Kaizad Gustad’s unorthodox Hindi comedy Bombay Boys (1998), the Rahul Bose-starrer White Noise (2004) and acclaimed documentary, Fire in the Blood (2013) which premiered at the celebrated Sundance Film Festival in 2013 where it was nominated for the Grand Jury prize. Hollywood Reporter referred to Ashu’s music for the documentary as “effective and graceful music adding to the power and poignancy of the theme”. The last Bollywood feature film in which he composed music for ‘Zubaan’ premiered at the Busan Film Festival in 2015 and was released mid 2016. He recently completed music for ‘Ashram’ a film that was released in early 2018.

Ashu has recently been scoring for OTT platforms having recently completed the Hotstar special ‘The Empire’ directed by Nikkhil Advani. He has also composed songs and BGM for Mumbai Diaries an Amazon original series slated to release early Sept 2021. Currently he is scoring another Hotstar Special that will be released later this year. Some of his past OTT work includes a short film ‘The Apartment’ for Amazon Prime, Feels like Ishq on Netflix and RejecX Season 2 for Zee5.

A popular figure on the live music scene in India plus a regular at the festival circuit, Ashu has also performed at the popular and highly respected Mahindra Blues Festival, Sulafest, NH7 festival, Sunburn as well as international festivals such as South by SouthWest (SXSW) to mention a few. He continues to perform with, and produce, multiple bands across India.

He is also one of the founding partners of BlueFrog, a brand that single-handedly changed the face of the live independent music scene in India with clubs in Pune and Bangalore.

True School has a unique educational philosophy, to equip learners to achieve their personal aspirations while maintaining a clear and in-depth awareness of the professional industry and the opportunities it presents. They help students reach their goals through a range of courses and learning and teaching approaches that instil 21st Century skills and ample opportunities for professional development. In addition to establishing a high-quality learning environment, True School of Music has created a global network of academic, accreditation and industry partnerships to ensure that the qualifications earned are globally recognised and the associated skill sets remain valid and relevant to the industry. Active industry engagement and real-world work opportunities play a pivotal role in True School’s learning experience through masterclasses, guest lectures, industry panels, industry networking events, performance opportunities and internships.
Ashu’s latest venture takes him into the digital space with his new vocal learning app singShala. singShala is an upcoming vocal education and guided content creation app that enables users to learn how to sing through a teacher guided singing interface. With real time feedback and AI powered practical vocal lessons, singShala enables vocal education for all, by making it accessible, affordable, and convenient. singShala recognises the joy of singing and wants to inspire a world where everyone feels empowered to sing without any barriers. This app will allow you to learn to sing at your own pace, in your own space with a curated curriculum by industry experts, primarily focussed on singing. The app uses patented technology to provide real-time, unbiased feedback – anytime, anywhere. Learning happens through unconventional methods, music trivia, interactive lessons. The app also includes daily challenges and artist led contests to help build a habit.

Ashu has been at the forefront of the change that has swept across the music landscape in India in the past decade.

He lives in Pune, India along with his dogs Bowie and Prince.